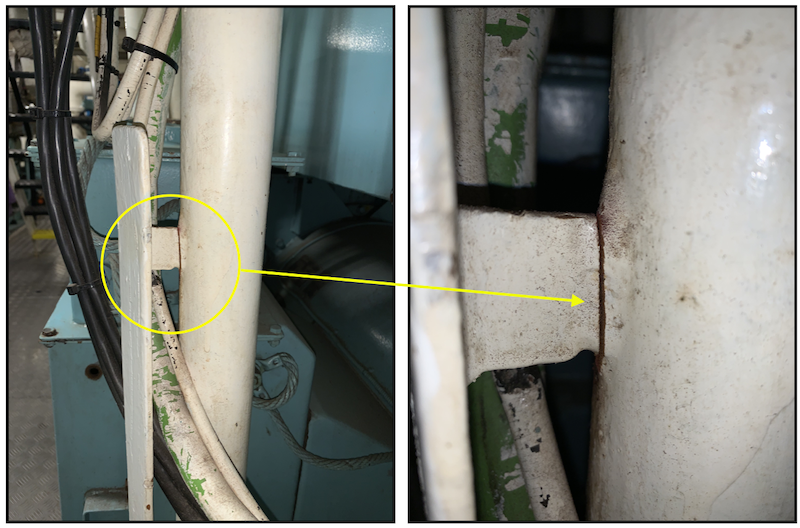 Becoming overly focused on just the engine, just the machine, equipment, without considering its surroundings can be a failing over time. Forgetting to monitor that which supports it for example, can lead to unexpected problems occurring down the line. This can be applied to all aspects of maritime operations of course, but let’s look at something interesting that came up on a recent vessel survey here in Killybegs.

The main engine is happily working away but inspection of the electrical cable tray supports to/from the engine showed up a broken bracket. A mere bracket, but the first to go and left to chance, may lead to a blackout or a fire condition arising! As we debate at length on the AEC courses: no component is there for decoration, everything must serve a purpose.

A study of this particular break indicates the engineering phenomenon that is fatigue failure. This is caused by the formation and propagation of cracks due to a repetitive or cyclic load, with the final failure often occurring at values far below the yield point of the material, simply due to the frequency of the cyclic loads coming on and off. The failure often starts at an area of stress concentration, awareness of some of the stressors can help in our battle against fatigue failure;

All have helped reduce the yield strength of this bracket.

A good re-weld will address this particular issue but it is worth bearing in mind that in some situations, rigidly fastening something will only cause issues to travel elsewhere, so be mindful nothing sinister is afoot i.e. engine mountings, alignment, load balancing across the engines cylinders etc.