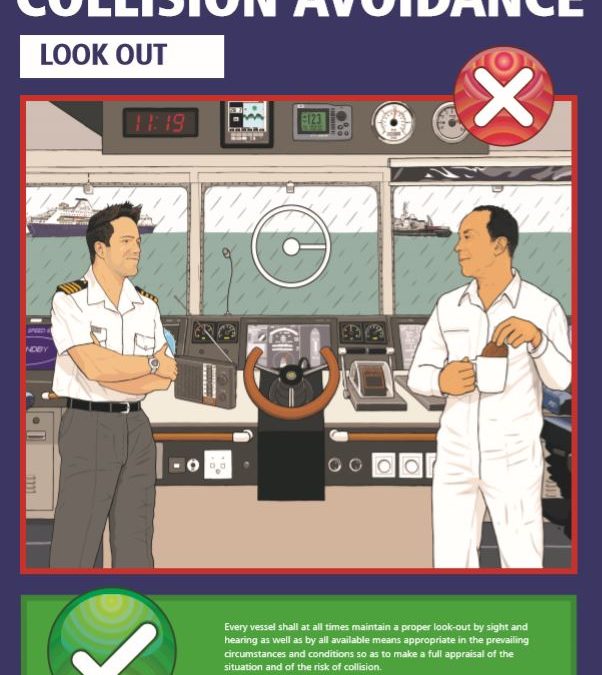 Image reproduced by kind permission of The Steamship Mutual SSM P&I Club
Rule 5
Look-out
Every vessel shall at all times maintain a proper look-out by sight and hearing as well as by all available means appropriate in the prevailing circumstances and conditions so as to make a full appraisal of the situation and of the risk of collision.

Maintaining a proper look-out at all times is an important part of safe watchkeeping, this includes posting a seaman as look-out from dusk to dawn and sometimes by day, especially when the visibility is restricted.
Requirements for safe watchkeeping are laid down in Chapter VIII of the International Convention on Standards of Training, Certification and Watchkeeping for Seafarers.

The look-out man should, if possible, be stationed forward, unless weather conditions
make this impossible, so that his attention will not be distracted. A further advantage is that he/she may be more likely to hear fog signals coming from ahead. Other factors such as the need to have a seaman immediately available in case of emergency and the benefit of being able to communicate directly with the look-out man should be remembered.

Duty Of look-out
The look-out should report any lights, vessels or large floating objects which he sees, and, in low visibility, any fog signals which he hears. However, in crowded waters, he could not be expected to report everything he sees; he must use his discretion and report the lights or objects which are likely to bring risk of collision, especially small craft which may not have been observed from the bridge.

Use of radar
Proper use in restricted visibility also at night in clear visibility when passing through areas where there were known to be numerous structures which are not always adequately lit. The radar should, be kept in use for the purpose of keeping a general lookout in coastal waters and other areas where regular traffic is likely to be encountered, especially at night.
The radar can be used assessing visibility more accurately Rule 6(b)(vi).

Full appraisal of the situation
To keep a proper look-out the officer of the watch, or person in charge, must also pay attention to what is happening on his own vessel keeping a check on the steering and seeing that equipment required for keeping the vessel on course is functioning correctly.

Anchor watch
The duty to keep a proper look-out applies also when a vessel is at
anchor, especially if there is a strong tide running, or if other vessels
are likely to be passing by. Most importantly, a ‘proper look-out’ means one, which takes in the whole 360-degree panorama. Crew assisting the OOW should regularly report what they are observing.

On slow moving ships, the biggest danger often comes from behind, where other ships can steal up surprisingly quickly. You may not have been sighted on the radar, you may not be easy to see if approaching a harbour with shore lights masking your own navigation lights and maybe the other ship’s lookouts are less than alert. You may in addition, disappear altogether whilst still a long way off, if the other ship is a supertanker in ballast or large container ship with its’ bridge sited aft and its forward visibility is obstructed by the height of the bow, deck gear and/or cargo.

Fast craft travelling at upwards of 20 knots are much safer from any vessel aft of them, but must nevertheless, still keep a good lookout all-round.

Not all Bridges allow unrestricted visibility. Many are obscured to the rear and have significant blind spots. If Rule 5 were to be obeyed to the letter, it would be prudent to have one person on watch on the bridge wing, to assist the OOW whose view is inhibited by the superstructure. When navigating at night, it is vital to preserve night vision and not be dazzled by your own ship’s instrument or navigation lights, so these should be dimmed accordingly. Any prescription spectacles should be worn and kept clean. Sunglasses and/or a peaked cap may cut down glare, especially when looking towards the sun.

“All available means” also encompasses such things as radar (of which more later) and VHF radio, in order that warnings from other vessels and the Coastguard may be received and heeded. Keeping a lookout “by all available means” could also be interpreted as having and using, a decent pair of binoculars. However it should be noted that carrying a pair of binoculars on board, is not a requirement under any existing IMO legislation.

Also note that Rule 5 says a lookout should be kept by hearing. On some older ships, this could be problematic, since your own Bridge Superstructure and possibly engine noise by way of the sounds coming from the funnel (exhaust noise) might drown out all but the loudest sounds. It is therefore prudent to try and keep one of the bridge wing doors open (the leeward one is a good bet) if at all possible. For those who sail on ships with a totally enclosed bridge, how do they obey Rule 5?

Remember that the intensity and direction of sound is particularly difficult to judge. Noise travels further over water, and the deeper the pitch, the less easy it is to estimate where it is coming from.